Fly me to the moon
Let me play among the stars,
Let me see what spring is like on Jupiter and Mars…

In the post-modern period the utopian aspects of modernism were parodied and questioned; in contemporary painting this ironic stance cannot be put back into the bottle but it is tempered by a more studied and thoughtful approach to modernism as something that was pluralistic, complicated and anxious as well as hopeful.

Norton’s work shows that our modern fascination with space travel, and science fiction, is as much about technological experimentation and rational thought as it is about art, fiction and dreams. We like to think of the stars and the planets as billions of years old, a primal ground linking us to ancient humans. But space as we know it is a modern invention, starting really in the enlightenment and reaching its apotheosis in the golden age of science fiction in the interwar period of the 1930s and 40s, the main subject matter of this show. Like dinosaurs, space is a modern cultural artifact, used to fuel our philosophical musings, our stories, and even entering our field of politics (such as in the Cold War). When Kepler was peering through his telescope carefully charting, he was also writing reveries of space such as The Dream 1634. When Voltaire wanted to suggest humans could better themselves through reason he suggested an interplanetary dialogue with a more sophisticated being in Micromegas, 1752.

In Norton’s exploration of these subjects he clearly plays with these contradicting ideas. If we revisit his major work to date Mars Gravity Simulator, shown at Performance Space his approach becomes clear. Here Norton theatrically recreated an anti-gravity training session within an art context. Dressed in an authentic looking orange suit, Norton asked the audience whether he or they had the “right stuff”. On one hand the piece spoke directly to the history of the space race, the real bodily effects of centrifugal force on the body, and the heroic dimensions of man striving to overcome planetary forces such as gravity. On the other hand everything was a fake, merely a piece of contemporary performance art. It spoke to our nostalgic memories of film, posters, pulp fiction, Dr Who and other television shows. Like Buzz Lightyear the audience was forced to grapple with the realization that they were not a space hero but merely a piece of plastic; but still as in Toy Story the fiction itself paid dividends.

The nostalgia is doubled in the paintings in this show. There is a return to painting and the popular poster, and a return to a simpler time where we all believed that the troubles on Earth would be solved by colonies on Mars. What boldly works in this show is the almost anthropological approach to space, a trans-historical account where nostalgia and contemporaneity, fiction and science, painting and its death in film and photography, space as an interplanetary reality and space as a cultural artefact, all coexist. Like an archivist Norton has curated a group of pulp fiction covers to tell various stories. They are in the past and to our eyes dated and a little farfetched. The utopian faith of Das Marsprojekt in this case is matched by its almost scientific style of spaceship design, all painted in a modern grisaille, of technical drafting (like Picabia’s spark plugs). Yet isn’t this faith still a contemporary force? When the Curiosity rover sent back an image of a sunset over Mars last year was this not a quintessential sublime image? The disembodied robotic eye was a human prosthesis, seeing things we could only dream. If we are seduced by the nostalgic hope in these images, as we have been seduced by the gender relations in Mad Men, it is not that we don’t know better, it is just deep down we wish we were living in these “simpler” times.

Finally another of Norton’s main aims in this show is to revisit the history of modern painting. The designs of these works with their open spaces and flat planes speak to modern design/typography and modern painting. At scale as they are here they recall the Pop Art answer to Abstract Expressionism’s painterly purity; they show a painterly interest in the pulp of the everyday but re-aestheticised, made more beautiful. In the use of gouache and other poster paint, and the limited release of the works as posters, Norton has a contemporary twist on Pop Art’s concerns. In the modern period there was a faith in the high art painting, the finished large acrylic or oil; in this show Norton again hedges his bets, in a contemporary turn, and returns his images to the street, to pulp beliefs. It is unclear then at the end of the show whether Norton is ironic or earnest about painting or about space as a frontier. On one hand the utopian faith of modernism is still present, space is reaffirmed as a subject and painting is reaffirmed as a medium. It is up to the viewer to decide whether in this nostalgic return Norton has declassed the images of space, or exhalted them. 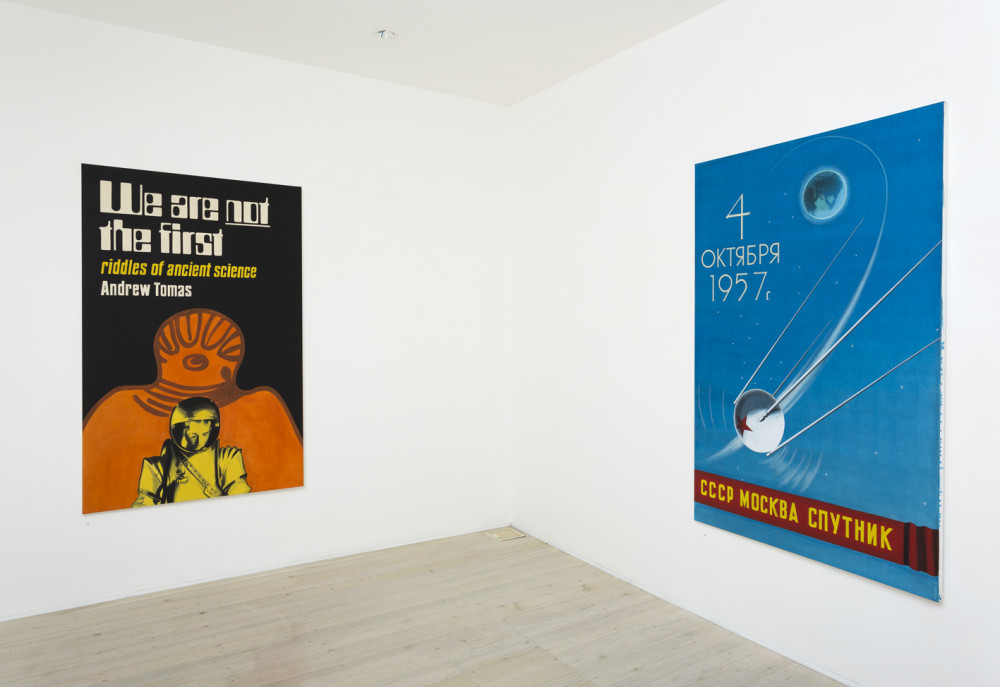